Akhilesh Yadav (pronunciation:(help·info); born 1 July 1973) is an Indian politician and national president of the Samajwadi Party who served as the 20th Chief Minister of Uttar Pradesh from 2012 to 2017. Having assumed office on 15 March 2012 at the age of 38, he is the youngest person to have held the office. Yadav is the Member of Parliament for Azamgarh in the 17th Lok Sabha, being elected in 2019.

His first significant success in politics was being elected as the Member of the Lok Sabha for the Kannauj constituency in 2000. He is the son of veteran politician Mulayam Singh Yadav, the founder-patron of Samajwadi Party who has served as the Minister of Defence in the Government of India and three terms as the Chief Minister of Uttar Pradesh.

Yadav was born on 1 July 1973 in Saifai, Etawah District, Uttar Pradesh. He was born to Malti Devi and Mulayam Singh Yadav, later Chief minister of Uttar Pradesh. Malti Devi suffered complications while giving birth to Akhilesh which put her in a vegetative state. She died in 2003. With Mulayam Singh Yadav busy making a career in politics, Akhilesh was brought up mostly by his paternal grandparents. He completed his early education in a local school in Saifai and then one in Etawah town He was schooled at the Military School in Dholpur, Rajasthan, then obtained his Bachelor's and master's degrees in Civil Environmental Engineering at JSS Science and Technology University. He also has a master's degree in environmental engineering from the University of Sydney, Australia.He is married to Dimple Yadav, a former Member of Parliament.

From 2009–2012 Yadav was elected and served as a member of the 15th Lok Sabha for a second term. During this period he was a member of the following committees: Member of the Committee on Environment and Forests, Committee on Science and Technology, and the JPC on the 2G spectrum case.On 10 March 2012 he was appointed as leader of the Samajwadi Party in Uttar Pradesh. On 15 March 2012, at the age of 38, he became the Chief Minister of Uttar Pradesh, the youngest to hold the office.

In May 2012 Yadav resigned from the Kannauj parliamentary seat to further serve as the Chief Minister of Uttar Pradesh after his party won the Assembly elections. In the same month he became Member of the Uttar Pradesh Legislative council. In the 2017 Assembly elections, the SP-Congress Alliance headed by Yadav was unable to form the government. He submitted his resignation to Governor Ram Naik on 11 March. In May 2019 he was elected as the Member of Parliament from Azamgarh Lok Sabha constituency.

Yadav was sworn in as the 20th Chief Minister of Uttar Pradesh on 15 March 2012, at the age of 38, winning 224 seats in the March 2012 assembly elections. During his tenure, the Agra-Lucknow Expressway, which is the most modern and longest expressway in India, being the first of its kind to be built in the shortest span of time, was completed and inaugurated. Yadav also launched the "UP100 Police Service", "Women Power Line 1090" and "108 Ambulance Service". Infrastructural accomplishments of his government include projects like the Lucknow Metro Rail, Lucknow International Ekana Cricket Stadium, Janeshwar Mishra Park (Asia's largest park), Jayaprakash Narayan International Convection Center, IT city, Lucknow-Ballia Purvanchal Expressway et al.

His chief ministerial tenure also saw emphasis on developing power sector, modernising the police force, setting up Kisan Bazaars and Mandis, introducing social welfare schemes such as Lohiya Awas Yojana, Kanya Vidya Dhan, Kisan Avam Sarvhit Bima Yojana, Pension Yojna and allotting unemployment allowances. Between 2012-2015, over 15 Lakh laptops were distributed to the 10th and 12th passout students by the Government of Uttar Pradesh, making it one of the largest distribution scheme by any Government in the world.

Since Yadav became chief minister, his family was divided into two feuding groups, one siding with him and the other with his uncle Shivpal Singh Yadav. Yadav had the support of his father's cousin, Ram Gopal Yadav. His uncle, Shivpal Yadav, was supported by a friend Amar Singh and Yadav's father Mulayam Singh Yadav who later backed Akhilesh Yadav.

Description above from the Wikipedia article Akhilesh Yadav, licensed under CC-BY-SA, full list of contributors on Wikipedia. 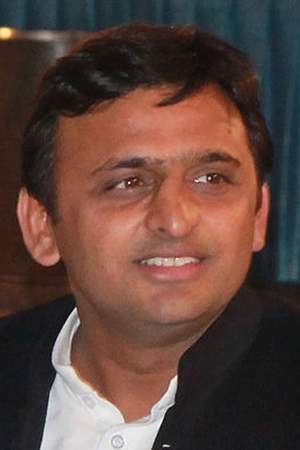